My WIP is not a quilt

I moved into my new house last week after a flurry of activity and some anxious moments when I thought I would not finish in time for the new owners to move into my old one. The relief was unimaginable when I carried the last thing out the door (not counting the towels I forgot in the downstairs bathroom - a welcome gift for the new residents?) 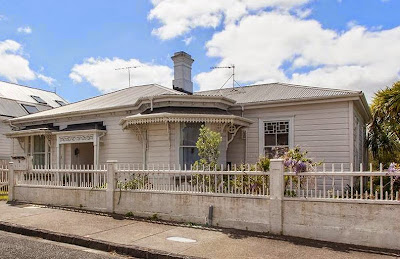 My move may be one of the shortest - only one house stands between my old and new address. One might think that a short move is easier, but it's not. If everything had to be on the truck by a certain time, I would have been ready; instead I could compromise and say to myself: "Oh, that doesn't need to be packed in a box, I can just carry it down the road." After about 50 trips down the road, sometimes in the rain, I realized the error of my ways.

There is nothing new about my new house. It is of undetermined age and has been altered through the decades. My guess is that the oldest original parts are 100+ years old and the newest parts are from the 70's. There are many inspiring details that I will try to post pictures of - some might even be integrated into a quilt design or two. There are many uninspiring details too (like the bathrooms). 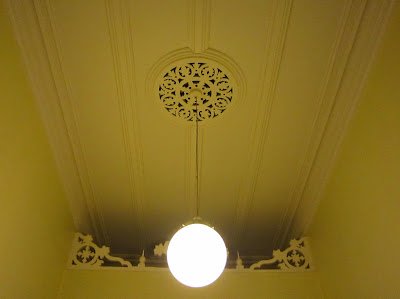 The old part of the house was divided into 2 flats and a basement flat was also added in the late 60s. Neither upstairs flat is quite right - one is smaller and sunnier and has the big original kitchen; the other is bigger and has a central living room and allows us to have a bedroom next to my girl who is 10 and not old enough to have her own apartment. Then there was the internet in one flat but the TV in the other. Going outside to have breakfast or check email was slightly inconvenient.

The only solution - find a door between them. There must have been 1 or even 2 doors from the main hallway to the three-bedroom flat - the house was once one large residence. Hubby got out the tools and after a few exploratory cuts, found the doorway. 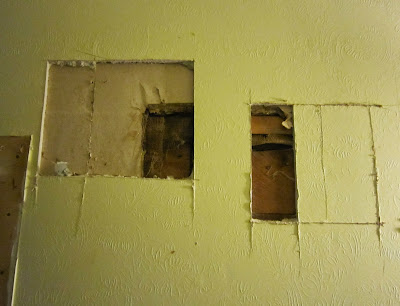 Behind the plasterboard in the three-bedroom flat was some artwork, painted there on some old wallpaper. It is odd but amusing. Its age is unknown but I imagine it being painted by some hippies some time between the door being closed up and the plasterboard added. The old walls in NZ are often rough boards nailed to the framing with hessian / burlap covering. Over this is wallpaper. It makes for interesting wall archeology. 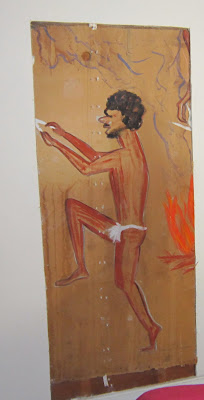 My sewing stuff is buried in a pile of boxes somewhere in the front room. There is an extremely slim chance that I can find it and make enough room to set up my machine and ironing board for some quilty therapy this weekend. The unpacking seems endless and it is hard to stay motivated when I know that in 6-9 months we will be packing it all up again so that the real work can begin. Does anyone know a good architect?
Posted by Laurina at 9:04 AM

Email ThisBlogThis!Share to TwitterShare to FacebookShare to Pinterest
Labels: house