The Monday Modern quilters seem to have a collective prejudice against brown. Oddly enough, brown shows up quite often in our quilts but is always declared "a nice brown" (not like those other browns).

Last months we were looking for a challenge and I thought that we should do a brown one. The idea: someone finds some clearance fabric in a not-beautiful brown and we all take a piece and do something with it. I knew that some of the girls might struggle embracing the brown, but I also knew that by mixing it with some other fabrics, anything is possible. The guidelines are simple: make something quilted using the brown fabric - the fabric must be visible and recognizable. That's it.

Liz took on the job of finding the brown and her little girl picked one out from the clearance rack - and here it is. It's a pretty normal quilting fabric from my perspective. It's a bit on the gold side (hard to see in the photo), and this could make it harder to work with. 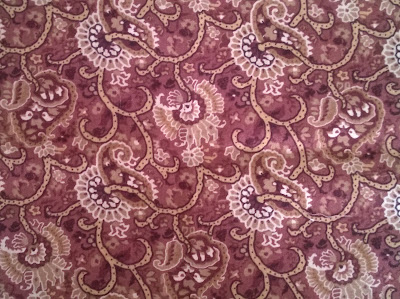 When the fabric was initially posted on Instagram, I went through my stash and pulled (most) of my browns. I realized that there are a lot of them - strange, since I don't like brown. But, I've been collecting fabric for a while, and I guess they've just accumulated somehow. 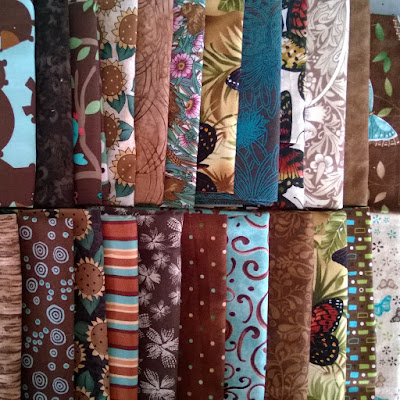 I did consider a totally brown color scheme, but decided that I'd rather mix it up and use the brown as an accent. Yesterday I went through the stash again looking for some feature fabrics with a bit of brown and other colors too. I found this cute little owl fabric and tried to pick out all of the other colors from it. It's an unusual combination for me, but maybe that's why I like it. 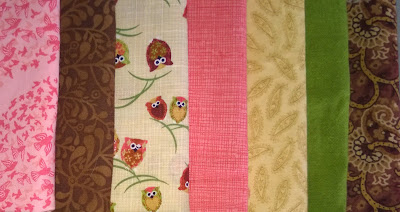 My daughter went for a butterfly print and came up with a second color scheme. (The periwinkle looks a bit odd, but there is that color in the butterfly print, it just didn't make it into the photo.) I confess, I am leaning toward this option because I am planning to make a cushion and these colors match the decor better.

Coincidentally, the Block Lotto this month is also using brown. I made three of this month's blocks but thought it was all too much brown for me, so I'm donating these to the pot.