I know that there are a few days left in the year, but I seriously don't think I'll manage to finish anything in that time. This year has been interesting - I spent 3 months in the US and did very little sewing during that time (except for keeping up with Block Lotto monthly blocks). And, after last year's push to finish a lot of UFOs, I feel like I've started a lot and finished little.

That said, I have actually started and finished a lot of smaller projects but some of those WIPs are turning into UFOs. And, I seem to have started some more projects recently, so the problem is getting worse. Regardless, I still have something to show for this year, and am not disappointed with what I have accomplished. 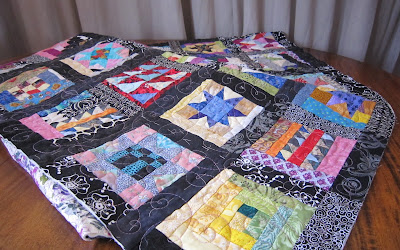 Crumb Quilt: I started this one with Jo's crumb along with me. The goal was to use up some scraps, which I did, but it seemed to create scraps too. Before I ever posted the finished quilt, DD (and the dog) adopted this one and it's been on the bed ever since. It might be time for another one. 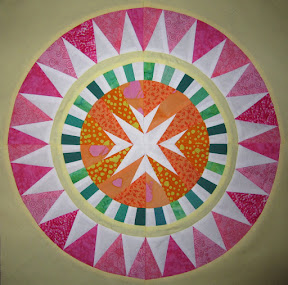 AMQG Baby Quilt Challenge: I did this NY Beauty based on the pattern from Sew Sweetness. I didn't win the challenge, but enjoyed making it - I hope that the baby/family that received it have enjoyed it too. One day I'll do another NY beauty for myself. 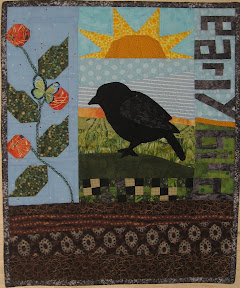 Cotton Robin Round Robin: I participated in a round robin and besides my finished quilt which I started with the appliqued bird (a NZ black robin), I added borders to two other quilts and did the quilting/binding on a third. Julie has started another round robin and I've been working on my center block this week. 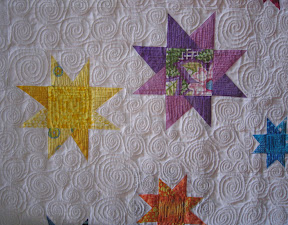 AMQG Raffle Quilt: I organised this one and had members create the star blocks. We did a working day to piece and sandwich it and then I did the FMQ on this bed-sized quilt. After that, I dropped the ball on this one. Although I organised the making of the quilt, I felt like I had invested so much time and was not reaping much benefit from the group, so I stepped away. 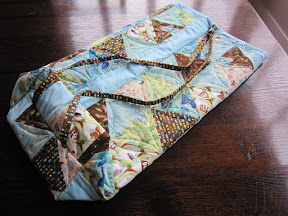 Ukelele Bag: I whipped this bag up one weekend after discovering that DD's ukelele was being unprotected in a box with the rest of the school instruments. I confess it is a little too short, but it's so cute, who cares? And it safely carried said ukelele to the Ukelele Festival a few weeks back to be played with thousands of other school children (and a few celebrities). 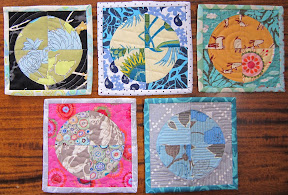 Mug Rugs: I made these 5 big mug rugs (or tiny placemats?) from scraps that I acquired at a Monday Moderns meeting. I gave 4 of them away to my office mates as Christmas presents as we all seem to sit at our desks and eat during the workday (sad but true). 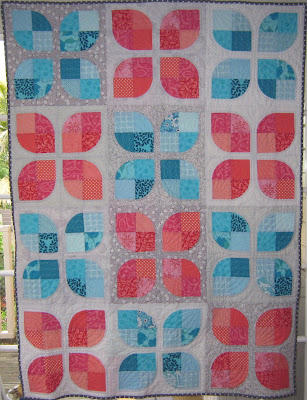 Suji's Quilt: My friend and hairdresser left for Melbourne with a month's notice. I made the large throw quilt for her as a going away gift. Unlike most of my work, this one was planned from start to finish and I did a lot of assembly-line work on it to get it finished in time. I hope it keeps her warm and cozy in her new home. 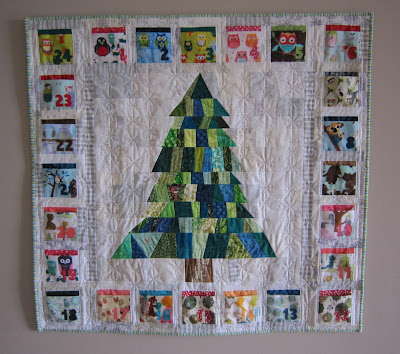 Advent Calendar: A response to DD asking for an advent calendar this year. I had one as a kid that my mom made with felt ornaments that we decorated the tree with. (It was destroyed by the cats but my cousin's is miraculously still around and brought many smiles when she posted it on Facebook.) My new version is more modern but I only managed to make two animals for the pockets (the rest were filled with chocolates). 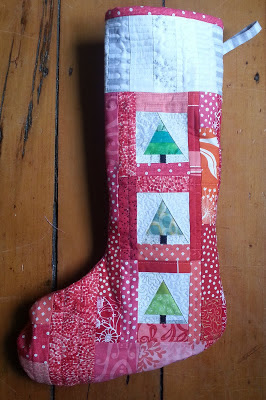 Christmas Stocking: A Monday Moderns challenge. We filled them with gifts and donated them to the women's refuge. I kind of wish I had kept mine - I ended up putting a bit more time into it that I had planned and I hated to see it go. I hope at least that it brightened someone's day - someone who needed it more than me. 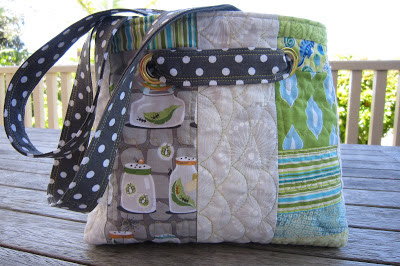 Bags for Christmas Gifts: I made 6 of these - 4 large ones and 2 kid's sized ones. They came out very cute and I am determined to make one for me and one for DD. So often I make gifts for other people and never make one for myself. I guess that's what happens when I have a deadline to meet and run out of time. 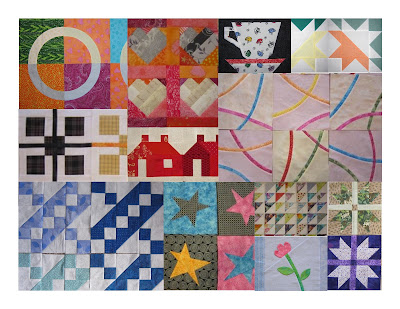 Block Lotto: I made blocks every month and won 48 blocks in March and have started 2 quilts from these blocks. I keep up with Block Lotto not so much to win the blocks but to continue to try new techniques and see how others deal with the design guidelines each month. There's always something to inspire me.

One more thing to add to this list is the Monday Moderns bee blocks that I have done for the past few months. I don't have pictures of some of them, but I've finished 4 sets since joining this group. Hopefully, this will be an ongoing monthly thing. 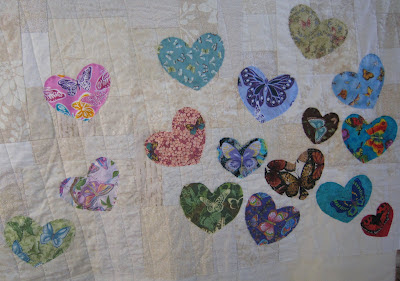 Butterfly Hearts: Hand-stiching on the hearts has been slow and I realised that they were all heading in the "wrong" direction. I'm also not convinced that the hand stitching will hold up and may rethink the applique method. I'm wondering if I should take all the hearts off and restart them. his one has been set aside for a few months. I definitely need to pick it up again. 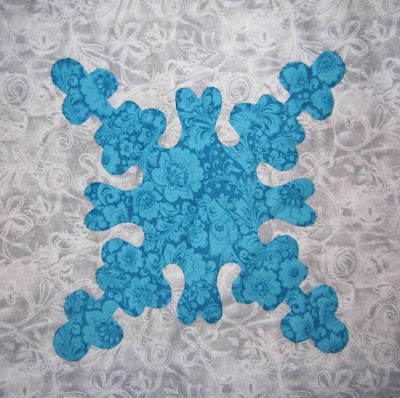 Blue Snowflakes: I've hardly made any progress on this project this year. I started it in April 2010 and have managed to finish about 7 blocks. Needle-turn applique is not something I enjoy, but I do like the results. Part of my problem is that I need really good light to do this work and daylight is my best option. Unfortunately, it's a luxury for me to have a few quiet hours during daylight hours without being interrupted by something. 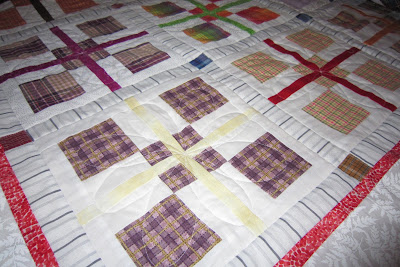 Block Lotto (quilt 1): I questioned my choice of bold red/black/grey plaid borders, but it will be a good quilt for the ski house once I get it done (somehow plaid seems okay near the snow). The second quilt I have planned with the remaining blocks will have a more "sophisticated" setting. 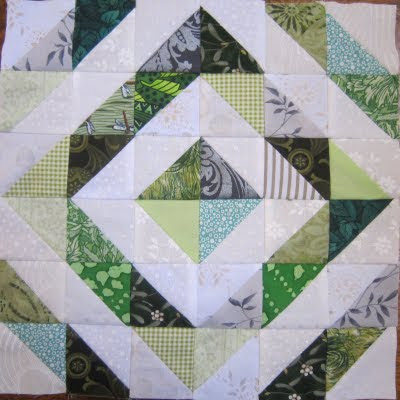 Green Triangles: After cutting and assembling 1,452 squares, I have made up 15 blocks (each one has 36 squares). This one is taking a while, but is one that I pick up on a rainy weekend at the beach house. I'm hoping to have this one done this winter (fingers crossed).


In January it's my turn to have the Monday Moderns make me bee blocks. This past weekend I worked through making my block and will write up the instructions before our meeting in 2 weeks. (Sorry, no photos yet). I went out and puchased fabric for this project which I wish I hadn't done - I have so much in my stash. I know it will make a stunning quilt, but it will be added to the pile of WIPs.

I also have started another round robin and this block is ready to be sent off. I seem to be involved with a few things and although they are fun, social, and test my creativity, they also have a habit of getting in the way of me finishing the big projects. I have yet to strike a ballance between the two things...there's always next year...
Posted by Laurina at 10:16 PM