More owl progress and some lilies

I finished making the crosses to echo the owl feet in my tea towel. At first I was going to put them all side by side, but found that the secondary pattern that appeared when the orange/pink crosses touched each other diffused the 'crossiness' of the blocks. So I added a 1-inch border on each one to give those crosses some breathing room. I like the two rows that I made, but think that they are very dark compared to the half circles and the tea towel center. This means that I'll need to lighten up the final border to balance things out.

Right now, the quilt is 35 x 39. Although I planned a small wall hanging quilt, I'm starting think that the scale of the owl design needs big and bold around it. Maybe the next border will be 6 inches bringing the quilt up to 47 x 51 which is more lap-sized than wall hanging.

I definitely want to do some triangles - probably equilaterals to reference the little triangle beaks. I do have two problems:


Neither problem is insurmountable. Although this challenge is supposed to run until March, I am keen to get as much done now as I can.

I am also working on a piece that my mother started and has asked me to finish. It's done with iron on pieces that are appliqued and quilted in one go to make a wall hanging. I admit that it's giving me some grief - there are some spots with multiple layers of fabric that have been ironed on and they are thick and hard to sew through. I am using a brand new reinforced needle on my Juki TL-98 which can sew through anything. Even still, it's hard to maintain even stitches and maintain good tension... 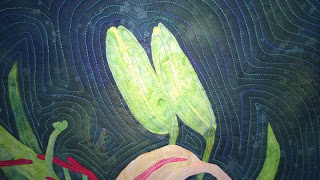 As always, I have concluded that even if each individual stitch or line is not perfect, the overall look is good. Let's call it organic. I have the quilting finished and am trying to decide on the biniding. The only thing I have on hand is the fabric I used for the backing that matches the stamens. Although I could use it, it detracts from the design. I think I'd prefer a more subtle color. 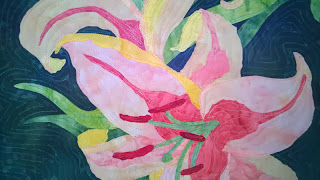 Earlier this week I saw some really inspiring quilts at Monday Moderns. I am trying very hard to keep myself from starting anything new. I have quite a few small things on the go including a round robin center block that I should see in the next week or two.

From 13 February, I will be down in Christchurch as a vendor at the Craft and Quilt show. This show has not been to the south island since the earthquake, so I am hoping that there is a good turnout. Poor hubby will be driving down from Auckland - I will be flying down.
Posted by Laurina at 5:04 PM