Let the sun shine in

The weather in Auckland has been pretty patchy this week - I woke to hail this morning. But, my day off yesterday was filled with sunshine - at least in my sewing room. 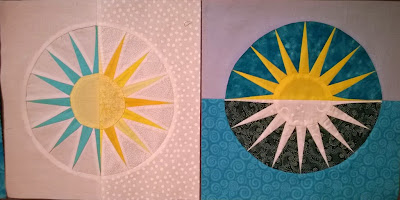 I won 15 sunrise blocks (7" x 14") from Block Lotto in June and a while ago I started piecing a giant sun to go in the center of a quilt to be surrounded by smaller ones. The half-sun blocks needed to be paired up to make full suns - and this was no easy task. It is always a compromise when you are working with elements in a quilt that were made by a variety of people.

I thought I would share my experience trying to put together some of these blocks. My goal is not to criticize any of the lovely quilters who contributed blocks - but there are challenges, and since this is the fifth quilt I've made from blocks that others have contributed, I have learned some lessons on how to best deal with some problems that come up.

I think that this block especially was at risk of being inconsistent. Different methods were offered for piecing (by hand or foundation paper pieced) and some people (including me) had trouble convincing their printers not to re-scale the patterns that were provided. A lesson to any of us creating a pattern for others: include dimensions on the pattern in both horizontal and vertical directions. My printout seemed correct in one direction, but I realized (luckily, not too late) that it was not correct in the other direction.

In my case, the variation of the width of the suns among the 15 blocks was almost an inch. Most were within 1/4 inch of each other. The sizes of the center half circles also varied, although not as much. My usual approach is to come up with a layout that obscures these differences - either with sashing or offsetting the blocks. But, some block designs are made to be interlinked and can often form intriguing secondary designs between them. For this project, I really wanted round suns, so I had to get creative.

I had three background colors to work with, so I grouped the blocks by background (blue, white, and yellow). Then I matched them up into pairs fitting them together as much as possible. Two blue ones were much bigger than the others and one of those was the biggest of the lot. For this one, I took in the large curved seam, especially at the edges by sewing outside the original stitching. This did slightly distort the block, but I knew I would trim them all square once they were paired up.

I needed to make one more half sun block so that I could have 8 pairs, so I made one with a yellow background to match the orphan that I had left. I admit that no pair is perfectly matched, but I don't mind. Now that they are all squared and trimmed, they look quite good on the design wall. I'm glad I kept every one that was sent to me and didn't give up on any of them by judging them too difficult to save. I can't imagine putting together 16 of these blocks myself - so I have 9 other quilters to thank. I made four of these blocks and they were pretty tricky. Three of them are in this quilt and the fourth (and best one) was sent to another winner. 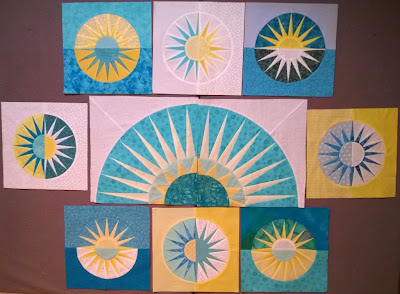 The blocks were designed to finish at 14" and I've trimmed them down to finish at 13". The big center square will be a 32", so I'll need some sashing so that I can put two small suns on each side edge of the center. I also don't know what I will do in the corners. I guess I'll figure that out once I finish the two other quarters of the center sun.

Linking up with Lee at Freshly Pieced.
Posted by Laurina at 9:51 PM