Stumbling towards the finish line

[NOTE: I was so disorganized when I wrote this last week that I never finished it - so, you have to imagine going back in time to read it and then moving forward in time to see the finished photos.]

Have you ever had a project that just didn't want to get finished? That's how I feel about my blue snowflake quilt - especially now that I've been so close to finishing for ages.

It's been a WIP for over 3 years and it was rescued from being a UFO a few times. In August I did a big push to get the last block appliqued and the top done, and by mid September it was mounted onto the Swiftquilter frame and I started the quilting. But then life got in the way and the quilting (which was more detailed than anything else I have done) took much longer than expected.

So, each deadline that I was trying to make, I missed:


The quilt has been near-done for almost two weeks, but the hand sewing on the binding took me a while and the tucking of hundreds of thread tails is lingering over me like some leftover Halloween specter.

[Here it is - finished and hanging in our merchant stand.] 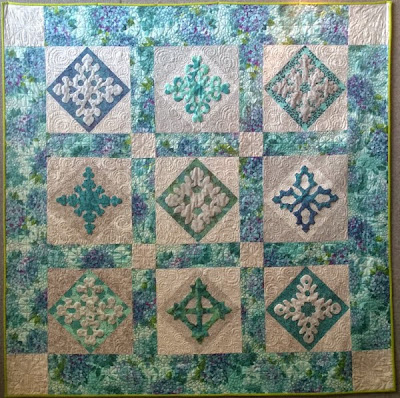 [Here's some detail, I love the back.] 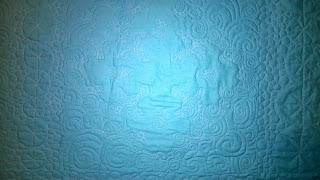 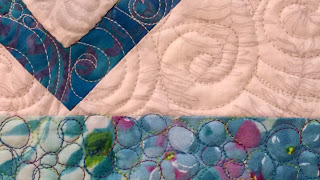 And then there's Mario (of Nintendo Mario Brothers fame). I am used to missing deadlines for myself, but this is not a lesson that I want to teach my 10 year old right now. I moved through Halloween unscathed by costume prep because last year's still fit and she was happy to wear it again. But, when the invitation arrived for Charlie's "Video Game Dress Up Birthday Party" this Friday, I knew I was in trouble. I did suggest putting a box on her head in the style of Minecraft, but that was not popular.

So, it was off to source costume supplies last weekend - $50 later we had fabric for blue overalls, a red t-shirt, red fleece for a hat, white gloves, white buttons, yellow paint to cover the white buttons, and a variety of stick-on mustaches.

So far, the overalls are sewed together, the hat is made, and the buttons have been painted with about 10 coats of paint. All that's left is to seal the buttons with acrylic and sew them onto the overalls. I also have to make massive buttonholes for the big yellow buttons. My Juki F600 has a fab automatic button-hole attachment, but it has it's limitations - in this case 1-1/4" buttons. My buttons are more like 1-1/2", so I will need to do them old school. I am considering using Velcro instead, it is just a costume after all. 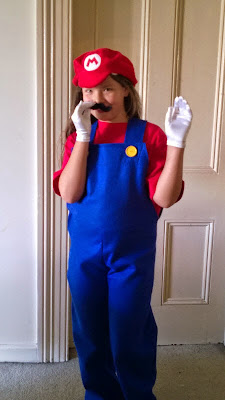 Meanwhile, tomorrow is setup day for the Festival of Quilts and I will spend most of it packing up sewing machines, accessories, tables, a Swiftquilter, display quilts, etc. and then unpacking them all for the show.
Posted by Laurina at 11:21 AM