This quilt is made from 15 1/2 sun blocks that I won from Block Lotto a year ago. I was determined to finish it before the year was up and I have achieved my goal. I won the blocks in June last year and they started to arrive during July. As I recall the weather was cold and grey, so these blocks were a sunny addition to the design wall. 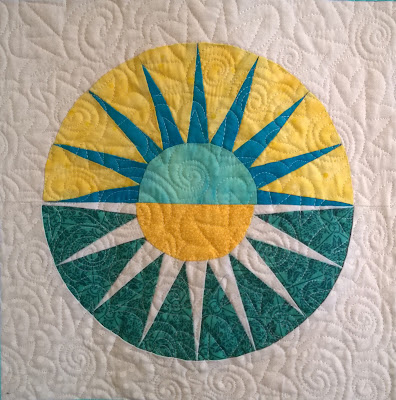 I started out by making an additional 1/2 sun block so that I had 8 pairs to match up. I made the large center sun by enlarging a pattern that I found here.

Then I was a bit stuck and couldn't decide what to do in the corners. I was too lazy to make 8 more of the 1/2 sun blocks, so I ended up making an enlarged and simplified 1/4 sun using another pattern from the same site that I used for the center. 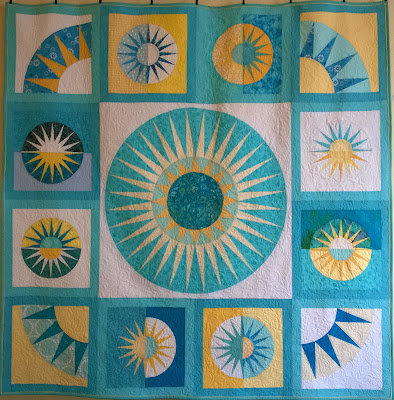 I had debated doing quilting around all of the detail, but I know that this takes me a lot longer and I wanted to do something quick. So, I designed a geometric spiral pattern to use for the quilting that would create a kind of grid of spirals connected with lines. I had also picked out a very fine aqua polyester thread - it's the same thread that I always use in the bobbin for quilting and I thought I'd try using it on the top as well. It's so fine it practically disappears and I thought this was a good idea. But, it was not to be. 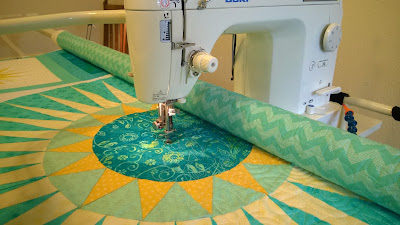 I had a lot of trouble with breakages and also decided that my spiral grid was ugly and uneven. So out came the seam ripper. I might add that it is not easy to unpick stitches while a quilt is mounted on a frame, but I persevered and it took me a few weeks to undo the 1/2 row that I had completed. 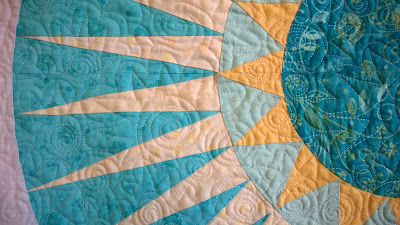 When I finally started again with a new design and new thread, it was all smooth running and I finished it in one day. I always swear by Superior threads - I use King Tut a lot, but this one was done with Magnifico in white and it was magnificent to work with. Too bad I have to order the big spools from the US, but it's always worth it.

The design is a meandering spiral, sun-rays, and bouncy echo combo that I came up with on paper. It's a variation of something I've done before and it was really quick and well-suited to using the frame. I also think that the all-over design slightly softens the bright colors and doesn't detract from the graphic suns. 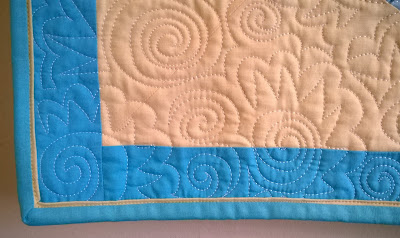 I tried a new method for the binding using instructions that I found here for a piped binding. This proved to be a good solution because I didn't have enough of either color to bind it, but I had enough to create this two color binding. I like the effect, but need to practice my stitch in the ditch (probably why I like organic quilting and rarely use straight lines).