I remember thinking this quilt would be ready for the last Blogger's Quilt Festival, but it was not. It was finished shortly after in early November 2014, so I'm entering it this year in the applique category. 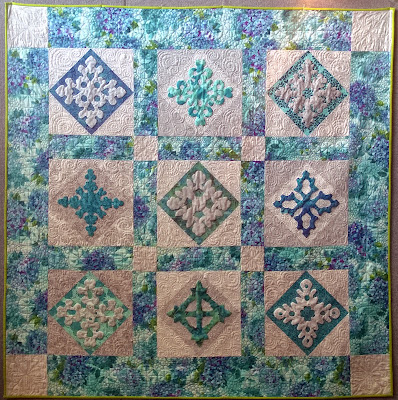 I started this quilt in a class at Symposium in Queenstown - I think that was in 2011. I took a class with Chris Kenna, I don't recall the exact name but it included the term scherenschnitte which is a paper-cutting technique. From my perspective it was an introduction to needle turned applique using freezer paper - I confess I did not develop a love for hand applique and it was a struggle for me to get this one finished.

My daughter loves blue and loves snow, so this one is for her. I have not actually given it to her or let her put it on her bed because the dog and cat are often sleeping there too. I think it may end up on the wall instead.

I quilted it using my Juki TL-98 on a Swiftquilter frame. I tried a few experiments with scale and different patterns. I love the effect, but it may be a while before I use tiny pebbles again as a filler. 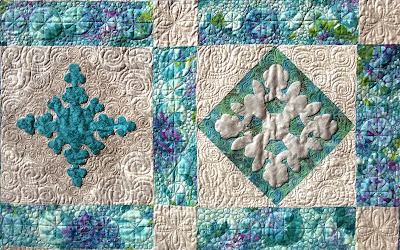