A week or two ago I finally mounted the pink kitty quilt onto the Swiftquilter frame. I thought I'd try an experiment and use a different machine than my trusty Juki TL-98P based on a request from someone about using another machine on the frame. I know that the TL-98P is the one for the job, but it's always worth trying new things. I won't go into my experience using another machine, because I doubt many of you are interested in that.

I do know that everyone loves a good cat photo, so let's get to the cute stuff...

I have taken to using staples to attach my quilts to the leaders (fabric attached to the roller bars) rather than pins. The staples are quick and easy to use and I flip around the base plate thingy so that the staples ends go outward rather than inward - this makes them really easy to pull out - too easy, apparently.

Here's my nice tidy setup before I started quilting. Notice the nice flat surface for quilting? 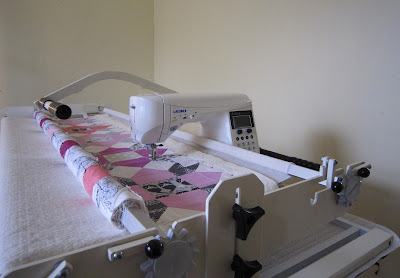 I did just a little bit of the quilting as a trial and then was planning to switch machines to really get going. Before I managed to do this, Sammy decided that the quilt made the perfect hammock for a heavier-than-he-looks cat. As you can see, where there used to be a nice flat quilt, is now a ginger-colored trouble-maker. 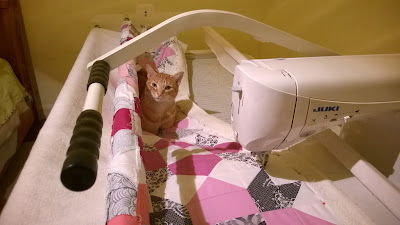 I have not yet sorted out this problem and instead have made a few more blocks from my scraps. So far, so good, but finding and trimming/cutting the scraps is a little tedious. Still, it's a nice distraction to do a block every few days. They are big (14") so should progress into a quilt without needing to make too many blocks. I haven't decided the finished size yet - I figure I'll keep going until I run out of scraps or get tired of making them. 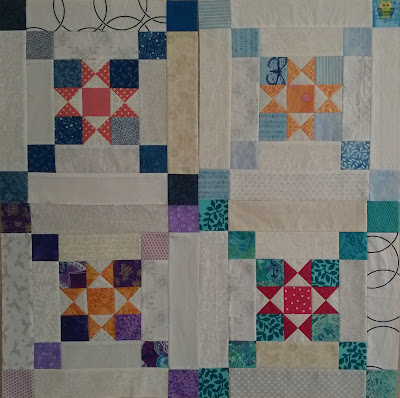