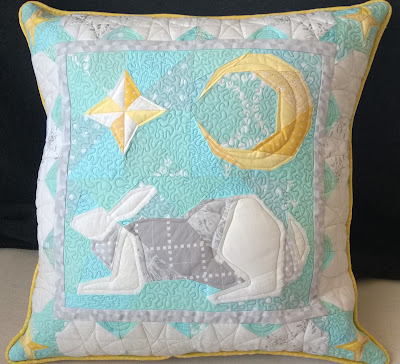 I have (just about) finished my Arctic Hare cushion. There are a few things to tidy up like threads and some basting and one little mistake that needs fixing. I'm happy with the finished product and Toffee has given it the dog seal of approval. 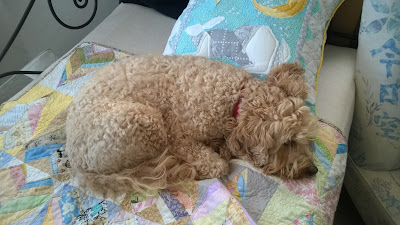 I decided to try making my own piping to go around the edge. I made bias strips with a piece of old yellow fabric (c. 1988). I thought I had some cording that was specifically for piping which would have given a better result, but I made do with some cord that I've had for ages purchased for some project long forgotten. The cord worked okay, but given the size of the cushion I probably would have preferred beefier piping. 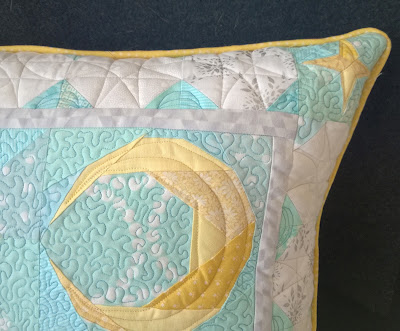 I do not have a purpose-built cording foot so I used a zipper foot. This worked fine, so I won't be rushing out to get a special foot for this job any time soon. Making the piping was pretty easy, but putting it all together was tricky, especially with all of the layers (I counted 12 layers of fabric and 3 layers of batting when crossing the overlapped backing that was bound on the edge). Both of my machines coped fine with the layers, I just think that when a 1/4 inch seam is taller than it is wide, there's a bit of slippage. In hindsight, a 1/2 inch seam would have been a good idea. 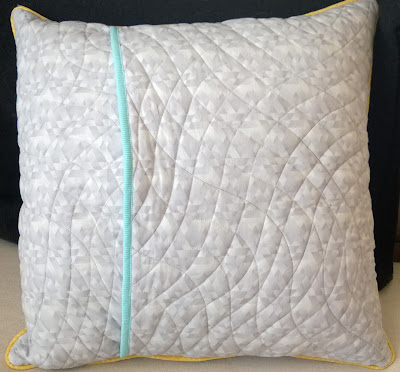 The back is made using the same grey fabric as the narrow border on the front. I did some wavy cross-hatched quilting using the walking foot just to hold the layers together and give it some texture. The overlapped edges are bound in a blue stripe that I used on the front as well. This whole project was an exercise in making-do. I did buy an inner (a bit too puffy, I think); everything else was hanging around my studio.

This is the first of my finishes for this quarter's 2015 finish-along - and a month before the deadline!
Posted by Laurina at 2:13 PM