We've started a round robin at Monday Modern quilters and I am organising it. I've been wanting to do one for a while, so 9 of us have joined in. After 4 years of participating in the Cotton Robin, I'm pleased to be doing one with this group. Unlike the Cotton Robin, we are sharing our work along the way - some of the girls were a bit nervous about the process and I think seeing each other's progress has helped with this.

My starting block is a red/pink and white checkerboard with two appliqued circles that I fussy cut from a Christmas fabric I had in my stash. I debated doing something a bit more avant-garde (or at least more modern), but decided that having a mix of styles would make it more interesting. 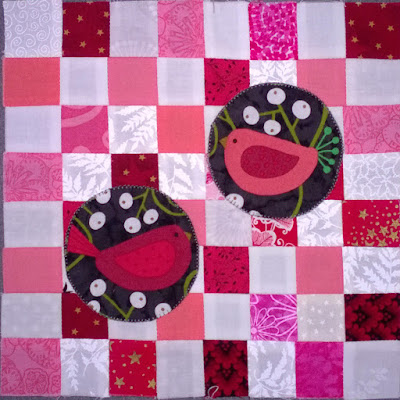 I have Melanie's starting block which she managed to put together after being overseas for the lead-up discussions. She used the cutest fabrics (my 11-year old announced "Adorable!" when she saw them). I had it hanging on the wall for a week before diving in this weekend. I was determined to use fabrics from my stash but really struggled with the green and the navy. I think I managed to find some fabrics that work without being exactly the same. 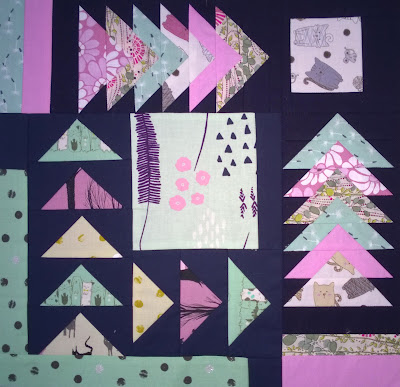 The flying geese (Melanie's go to pattern) were my inspiration. I decided to stack them up for some variety and drafted a paper pieced pattern to do this. I had to add the cute cat fabric, but am wondering if I will re-do the corner piece because I don't like the direction the cats are facing (which way is up?) and think it should be a bit larger. I may need to fussy cut that one to get it to work better but I have 3 more weeks to play with it, so who knows?

I only added to two sides which I think balances well. There will be 2 more borders added to this one, so it will be interesting to see if the asymmetry continues.

Email ThisBlogThis!Share to TwitterShare to FacebookShare to Pinterest
Labels: Monday Modern, round robin