We are in the process of adding the third borders to our little quilts after making the swap last Monday. I have two to work on since one of the girls has dropped out and being the organizer I felt a little guilty and decided to at least add her last border so that she could quilt it.

The second border that I did last month was a bit of a mishmash after I ran into a few design issues. I made the paper pieced diamonds first with a very dark navy background and then with a grey background. I thought one was too dark and the other too light, so I decided to balance it out and do half and half. I had to ponder the corners for quite a while and admit that it I'd planned it out, I would have just mitered the stripes in the corner. But I didn't make them long enough to do that and wasn't sure I had enough fabric to re-cut the strips.

Even with these hurdles, I liked the results and (as usual) I always enjoy a challenge. 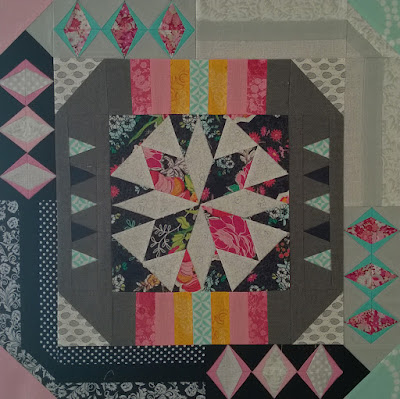 This weekend I worked on the third border for one of the two I have. The original block was a tiny Seminole-style piece in green, orange, and mustard. I think it only measured 3" x 9". I wanted to refer back to that original piecing and added 4 patches on point in those colors with the navy thrown in. The background fabric is an odd color, but seems to go (I hope).

My original plan had 2 rows on the top and bottom, but it was too much so I removed one row - not easy when they are on point. I was determined not to re-piece the whole row so I ended up inserting the background triangles using y-seams. Tricky, but quicker once I worked out what I was doing.

I debated adding a final plain border, but it was necessary because in my re-work I had to use some HST on the edges instead of the QST I should have. With the bias on the edge it was at risk of getting really mis-shapen. This was the best option that I had enough of. The owner can reduce it down to minimize the effect, if she likes. 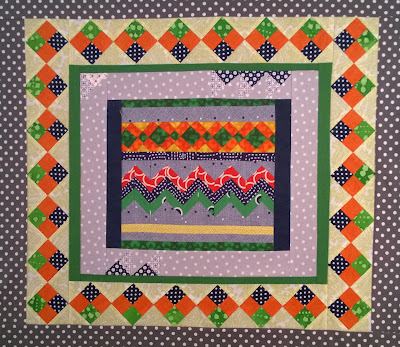 My last 'victim' is a fantastic piece with a huge variety of animals and colors. I already have some ideas on what I am going to do. I definitely want to make it taller and envision some reed-like vertical elements. But, I don't know if I want to add to the happy chaos or try to calm it all down. I'm leaning towards more color because the original block with the frog is so bright. We'll find out next weekend... 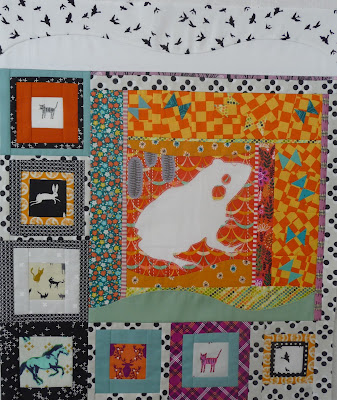 Email ThisBlogThis!Share to TwitterShare to FacebookShare to Pinterest
Labels: Monday Modern, round robin