I've been flagging a little on the quilting front. Yes, there have been round robins and Block Lotto blocks, and a few other bits and pieces, but nothing that qualifies as a "project". This is partly due to a natural winding down on my part as I've packed away my quilting frame and an (hopefully) preparing to pack out a lot more in preparation for house renovations in the new year. Another limitation is that I am determined to use up some of the fabrics in my stash and frankly, I don't like some of them or at least I don't know what to do with them.

But creative salvation came in the form of a pregnant co-worker. I haven't known her that long, but she is sweet and has been such a great help in recent weeks. I thought a baby quilt was just the thing to get me motivated to do something small and manageable. 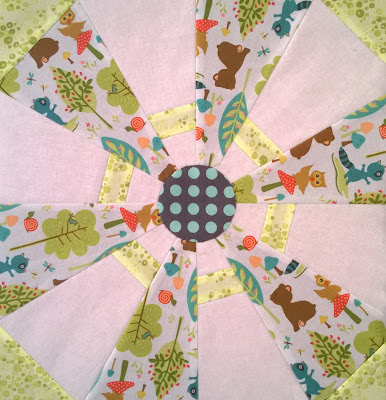 Ages ago I toyed with the idea of a doing a modern inspired Dresden quilt. Some of the Monday Modern girls recently attended a Modern Wedge workshop with Kathy Doughty and have been making some beautiful blocks. In my usual way, I could not just follow that pattern, so I did some online browsing and designed a block that suited my purposes.

I did a few things to make this block: I only used 12 wedges (30-degree angle) which meant less pieces to deal with and a better size wedge to feature the fabrics. Half of the wedges are in the feature fabrics and the others are cut from a strip of white with a 1" lime green insert. I put the lime green in a different position on each white strip and then cut the triangles by flip-flopping them to end up with 2 sets of white wedges from each strip. I used a similar method for my Hexa-bee quilt.

The other thing I did was add setting triangles to the corners to square up the block so that I only had to trim a bit off.

The feature fabrics are from my stash. My friend does not know the gender of her baby, so I had to pick something that would work for a boy or girl. My girl loves blue and green and I seem to have many blue/green animal prints in my drawers. Once I picked them out, the green was a natural partner and I was off and running. 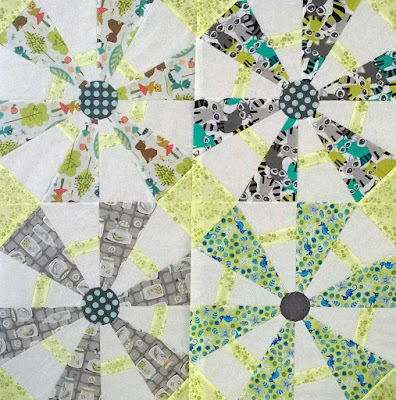 I admit that I like these blocks so much that I was tempted to keep them for myself and start something else for my friend. I know that I can always replicate this block, but I never do the same thing twice, so it seems unlikely.

Linking up with Lee at Freshly Pieced.
Posted by Laurina at 10:57 AM