A pillow for a favorite teacher

My daughter's favorite teacher, Ms. J, announced that she was leaving at the end of this year, so I was naturally enlisted to create a gift. Coincidentally, Robyn had a paper pieced dolphin pattern that she needed testing, so it seemed like the perfect opportunity. This was especially true since Ms. J was the organizer of the school Eco Warriors - what Eco Warrior doesn't love dolphins? 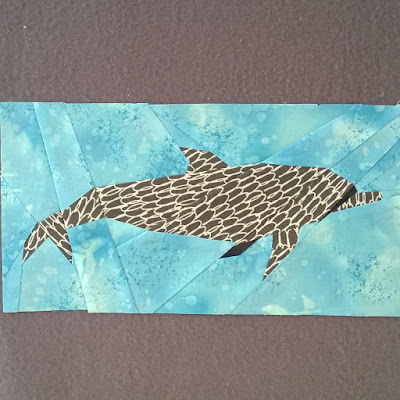 The last pattern test I did for Robyn was my arctic hare which I made using fabric from the scrap basket. This time I thought I'd be a bit more refined and just use one fabric for the dolphin and another for the background. 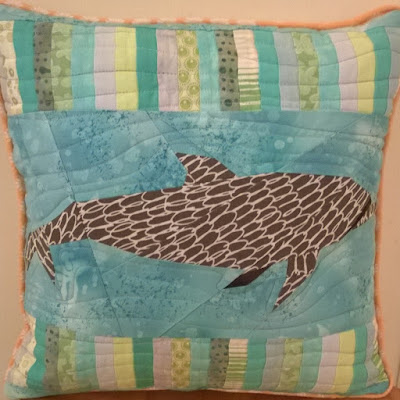 I admit I started late (Sunday, day before last day of school), but I figured I'd get through it pretty quickly. I confess I was being very optimistic. I think my main problem was lack of planning; I had not really worked through what I was going to do besides the dolphin and probably should have considered all aspects of the project beforehand. This is especially true in a country where shops are not open for extended hours - on a Sunday they would all be closed before 5.

Usually I would have made an overlapped flap in the back to take the cover off easily for cleaning but since I didn't have much backing fabric and was concerned about the timing, I thought I'd forgo that and just sew the inner into the pillow for all eternity. Turns out this is not as easy as it sounds and the time it took to shove the inner into the too-small gap and then hand sew the opening shut (especially with the added piping) almost undid me (besides, it was after midnight by this time). 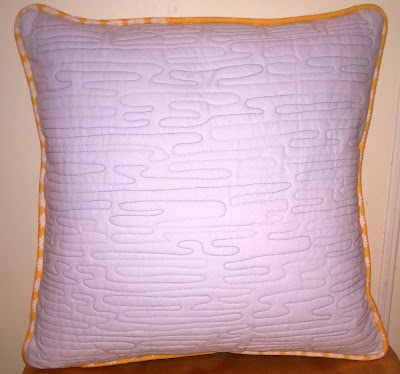 For the quilting I chose a pattern that would go quickly, and it did. The water ripples on the back took about 20 minutes and the wavy lines around the dolphin on the front took about the same. My daughter thought the orange piping would be a good option, and I agree it was the right choice. Next time, I'll start just a bit earlier when I have a gift to make - I admit I'd do a few things differently if I had more time. Still, I think it was a nice gift for a great teacher - I only wish she wasn't leaving.