About 40 years ago my family lived in England and my mother was nibbled by the quilting bug while living there. She managed to collect some Laura Ashley prints, some of which were off-cuts from the clothing line that they did. One pile was blue - I think this was made into a grandmother's fan design and finished a few years back.

For years, there was a pile of red fabrics cut into diamonds, hidden away in a box. The last time I was at my mother's house I found them and imagined that I could do something interesting with them. I was inspired by the recent red and white quilt exhibits, but red really isn't my thing. 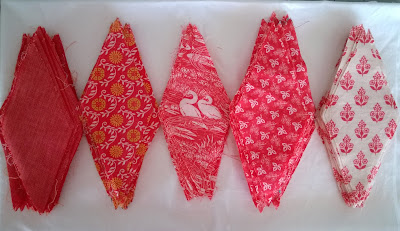 I think my mother planned to do 8-pointed Le Moyen stars. She partially pieced 1 or 2 and some of the other cut pieces showed signs of being sewn and then unpicked. I admit that some of the 'old school' methods were much harder than those we use today - like tracing out templates, using scissors to cut, marking seam allowances, etc. 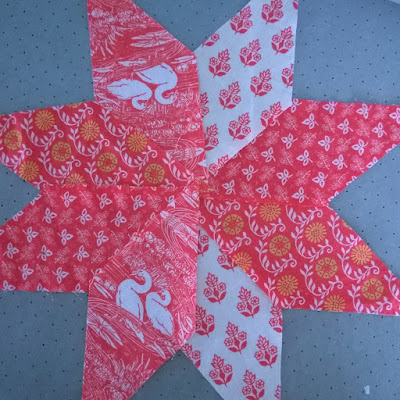 After having a play with the diamonds, I decided to use them to make a large medallion - I know it as a Lone Star, but I've seen a few other names as well: Star of Bethlehem and Blazing Star. Usually it's made by creating strip sets of the fabrics and then cutting across them at a 45 degree angle to make the component pieces. I've never done this, but it looks to be pretty straight forward. There are two disadvantages to this method: firstly, you have to start with strips and I have pre-cut diamonds. The second disadvantage is a little less obvious.

If you look closely at my mother's diamonds, you can see that all of the swans are fussy cut and the directional print (red on white) has all of the flower motifs lined up along the diamond. If you cut strips on the grain, all of the patterns are leaning and you lose the lovely radial effect when the pieces are laid out. If you look on the internet, most quilts like this are made from solids or prints that don't have an obvious direction.

So, after a bit of experimentation, I worked out that if the strips are cut at 22.5 degrees, the patterns line up. You'd think this would be a big fabric waster, but I managed to get 14-15 diamonds from a fat quarter no matter which way I cut the strips. 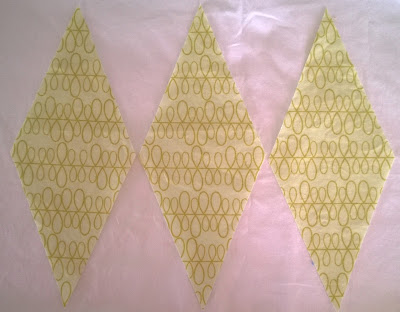 I pulled a few fabrics from my stash including some corals (yuck), oranges, and greens. Usually I would not go with green and red (think Christmas) but one of the original fabrics has orange and lime (or is it avocado?) green flowers. The plain red is actually a shot fabric with red in one direction and white and orange in the other, so more orange there too.

I found a template on Jinny Beyer's website that I could color in to trial some designs. After about 5 tries, I settled on a design that makes the best use of the pre-cut pieces and 3 fabrics from my stash. I've had to order yard lengths - one green print and one orange one for the biggest rings which require 40+ pieces. I was careful to pick patterns that were not directional so I can cut them on the grain. 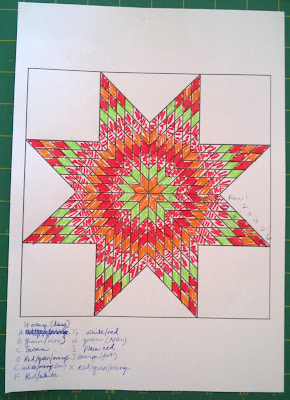 So far, so good. I'm really enjoying this process of making a design work with some limitations (the pre-cut vintage fabrics). I never would have mixed these colors, but in the end, I think it's a nice combination. No idea if there will be pieced borders outside of the center medallion (finish at 42.5") - I will cross that bridge when I get there. 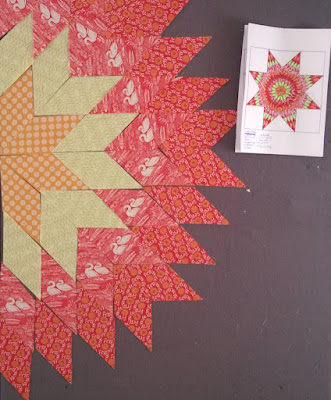