Back in August I organised a round robin with some of the members of the Monday Modern quilters. Nine of us made a center block that was added to by 3 other quilters and then quilted by a fifth person. This Monday, all of the quilts were returned to their owners and I have to say that we are a fabulously creative bunch!

Not everyone was as enthusiastic as I was, but I think that everyone learned something about themselves as a quilter. It is quite a challenge to collaborate with other people, do work that the owner will like, and still be true to one's own quilty voice.

Every month when we exchanged quilts, I would categorize them in my mind based on some characteristic - orange vs. not orange, round vs. pointy, animal vs. inanimate, calm vs. busy. It was so much fun to watch them change as different personalities added to them.

My quilt started with a red/pink and white checkerboard background and appliqued circles with birds on them. The finished quilt is so pretty with just a bit of a Christmas vibe - maybe because of the original bird fabric and the fact that I received it back just before Christmas. 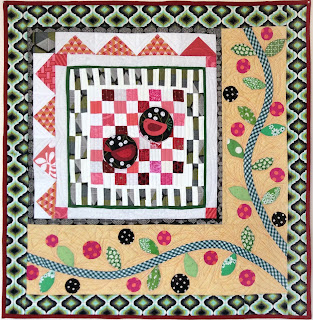 On the back was a recycled green cat that had been part of the front (it's a long story). 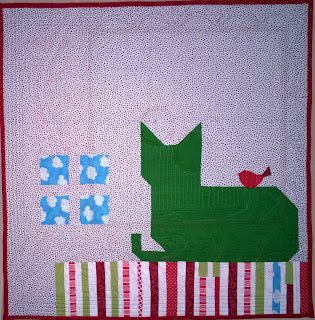 I worked on 4 other completed quilts (in order: first border, second border, third border, and quilting/binding). I tried to do something very different on each one. I confess that I do have a favorite, but I'll keep that a secret. 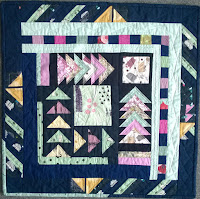 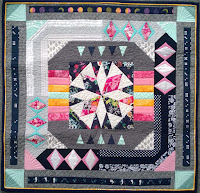 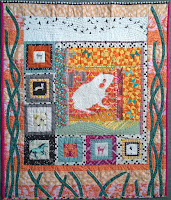 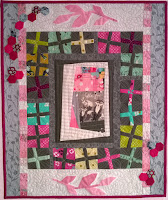 And another one I did work on but was incomplete because someone needed to opt out halfway through, and the 3 that I didn't work on. 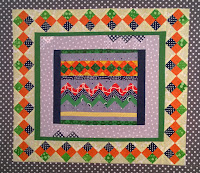 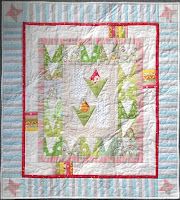 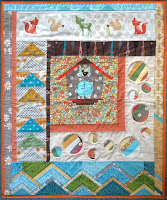 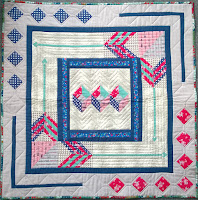