There was a rumour of rain this weekend. It's been so dry in Auckland this year and we are desperate for rain. A wet weekend is a quilting weekend, so I was hopeful about getting some things done.

This week I've spent some time on my Cotton Robin round robin second border. So far so good. But, it's hard to judge when working on a project for someone else - is less more or is more needed? That's about all I can say about that one.

Last night I picked up my butterfly hearts quilt again. After sewing the hearts on with a running stitch of embroidery floss, I decided that it was too delicate to hold up to wear & tear. I tried a machine zigzag around 2 of them, but the results aren't great. This could be my technique or maybe it's just not the right approach. 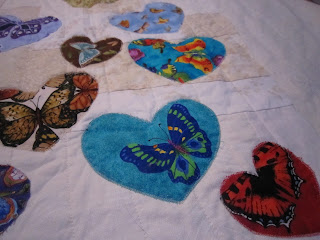 So, what now? Carry on? Take them off and try something else? Needle turn? Buttonhole? This one has been on hold for a while and I really want it done.

I did a few more hearts with the zigzag and this is the way I will proceed. Sometimes, I have to compromise to get the job done and this is one of those times.

Today I went to a small quilt show put on by one of the local groups. I've been a few times over the years and admit that my taste is changing and this group is probably not producing work that I appreciate these days. So, I asked myself - how can I look at each piece and still appreciate elements of it without necessarily liking the whole thing? So, I broke each one down by colour, fabric, pattern, and quilting. I enjoyed this approach and it made the trip to the show worthwhile - working through each element systematically allowed me to filter out the elements that did not appeal and focus on those that did.

I've also been working on the Monday Modern curved cushion challenge. I did some FMQ on the background using some biscuit-coloured variegated thread I picked up at the show. I should have done the circles first, because there's some puffiness I'll need to deal with now. I just didn't know if the circles needed anything, so I left them. I've now decided that they do need something but don't know what yet. 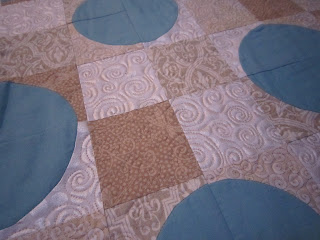 More sewing on the cards tonight - Melbourne Formula 1 is on TV, so I'm steering clear!
Posted by Laurina at 8:03 PM