I'm working on a project which is top secret. I have a picture in my mind but was not sure about how to accomplish my vision. But, I wanted to stretch myself and thought it was time to try something new. Not that anything I'm doing is new, but it's new to me.

My first challenge was to figure out how to make a skinny bendy strip. These are often used as vines or stems in floral applique. The obvious thing was that I needed to use a bias strip - but there are different techniques out there - many requiring tools I do not have. So after a few very sad attempts and not being happy with the width of my curvy line, I did the only thing one can do in such a situation: I called my mother.

Those of you that know me will agree that I am not fond of hand sewing. But, my mother is a great hand-sewer and does a lot of applique work. She suggested this technique to me that does not require tools, pressing edges under, or sewing tiny skinny tubes of bias.

You lay the bias strip right side down with one raw edge along your design line (I drew mine lightly with chalk) and sew it down using a running stitch - keep your stitches a scant 1/4" from the edge. I pinned mine a lot after my first attempt ended up puckered and sad. These are tiny applique pins and they work well for this. 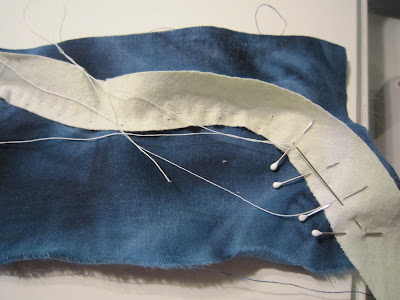 As you stitch, some of the curves will require you to coax the strip around - take your time. I found that it is most important to keep your background fabric flat - the bias will flatten out later.

Fold under the raw edge with your finger (this is like needle-turning, but I didn't really use my needle). Work your way slowly along the strip, sewing the turned under edge using your usual almost-invisible applique stitch. Watch out that you don't turn under too much and expose the raw edge underneath. 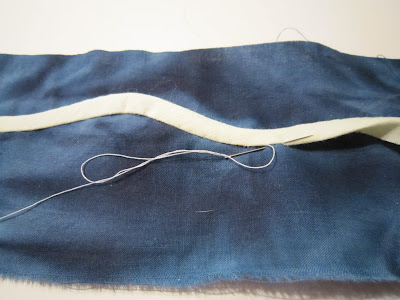 Every 3-4" I stopped and did some ironing. I used lots of steam and barely touched the fabric. This helped the bias to stretch/unstretch and make the curves smoother. I only did this along the way because I was nervous that it would not lay flat. I think after a while, it would be unnecessary.

The finished trial piece is okay, and I know that it will give me the effect I want. But I really wish I could get tighter curves. It certainly works best with gentle smooth curves and maybe there's a secret that I don't know yet. 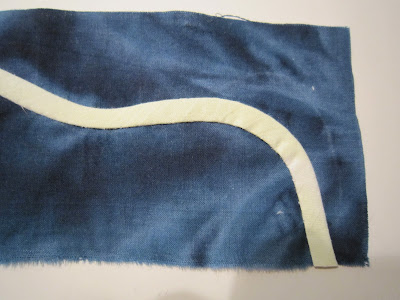 Another technique I tried (aren't I adventurous?) was broderie perse. I used a fusible paper-backed webbing to stick it to the background after carefully cutting it out. At first I tried a blanket stitch using normal sewing thread and it didn't look great. When I switched to 2 strands of embroidery floss, the results were much better. I need to practice getting the stitches closer together because it is a raw edge. But, I'm happy enough with the results. 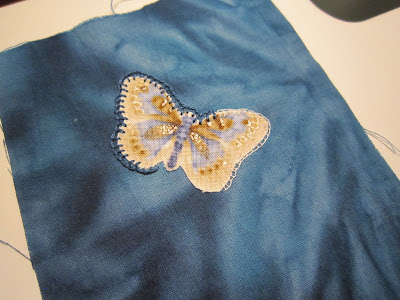 I have yet to do any work on the 'real' project and have been playing with some scraps. So, I still need to decide if I will use either or both of these methods and if so, choose some matching fabrics for it.