The Monday Modern Quilters are planning an exhibition in one of Auckland's historic houses. Part of this includes a small challenge quilt which is a modern interpretation of a traditional idea. I like to think that most of the quilts that I make 'from scratch' fall into this category, but maybe not. For some reason I have been struggling with this challenge. I have had lots of ideas, but I worry that they are not 'modern' enough. This is probably because some of my trademarks are not necessarily aligned with what some people think of as modern.

Last week, I decided to move forward without reservation. My first decision was about the colour selection. I have been enamoured by grey for a while now and decided it was time to pull all of my greys out and have a look through them. I was surprised how many I have collected. I debated adding a bit of colour, some chalky blue solids perhaps, but decided against that.

I'm keeping my overall design a bit of a secret for now, but am working on some of the sections of the quilt that I will share with you. So far, I've made a bunch of square in square blocks. I like the chevron designs that have magically appeared between the light squares when I sewed them into staggered rows. 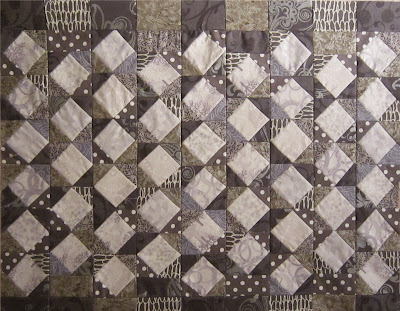 The next part of the quilt requires about 300+ little rectangles which I am cutting out now. All of the pieces are quite small because the finished quilt is small (about 30"x45"). I tried to get them all cut out this weekend, but my new toy got in the way. I'm on my own next weekend, so no excuses.