Origin: Middle English: from Old French folie 'madness', in modern French also 'delight, favourite dwelling' (compare with sense 2), from fol 'fool, foolish'
My definition of folly is on the design wall. A few years ago I had an idea about using some 'bonus' HST squares to make a quilt. I only had a handful of these squares and they were a funny size because they had been trimmed off of something else. Instead of using these as an inspiration, I replicated them. 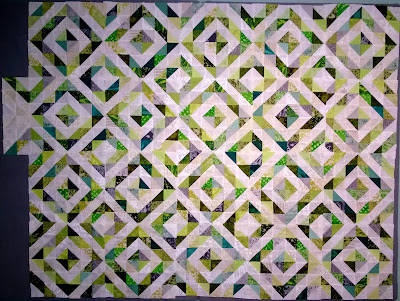 Instead, I moved forward.

These have been languishing at the beach house for at almost 2 years. Every time I go out there I make a few on the weekend. As of last week I had 20 of the component blocks. I decided to bring them back home and make an effort to get more done.

I was sick earlier this week and managed to make 8 more blocks between naps - only 8 more to go. Then I have the 'edge' blocks to finish. These are 2 squares wide and are mostly white with some green to finish off some of the square designs to create a border of sorts (I've made one an put it on the design wall). I'm determined to finish them this weekend. We'll see if I succeed.