Yesterday was the first day of the Auckland Festival of Quilts and our first public outing selling the Juki sewing machines and Swiftquilter frame. I took a few photos while setting up before the crowds came in. 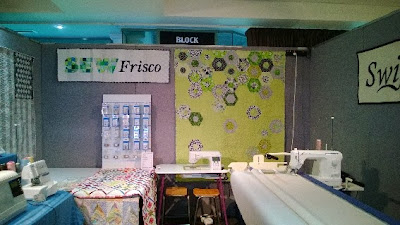 I did add some more quilts opening morning because there was too much grey on the divider walls. Initially, I wanted to limit them to those I made with the Juki machines, but hubby convinced me that any quilt was better than a blank wall. It was a good call because my crumb quilt (washed the night before because the it's on DDs bed and the dog sleeps on it) received a bit of attention and brought a few people in to take a closer look. 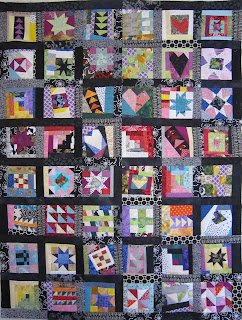 We had quite a few people interested in the machines and the frame. My husband commented that every person that he spoke to already had one and were coming in to say hi to the man who originally sold them. We did get some good feedback about improvements or changes and we will take these home for consideration.

I didn't think the show was as crowded as previous years - someone suggested that the holiday on Monday prevented people from taking time off on Friday. Although I did not leave the stand much and hope to get a good look at all the quilts and other vendors on Sunday afternoon (supposedly the 'slow' time).

If you are in Auckland, come and say hi.
Posted by Laurina at 7:20 AM