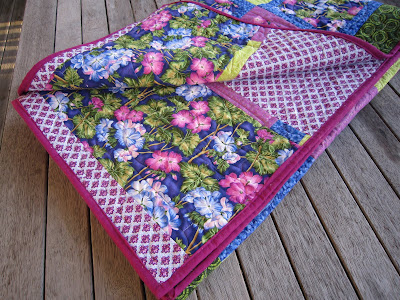 I can't believe that I managed to finish this quilt on the weekend. When I made the decision last week I regretted it immediately. Surprisingly, I accomplished a lot this weekend (besides finishing the quilt) so I guess there wasn't as much to do as I thought.

I have never been know for my brevity when it comes to writing. I send long emails and receive one-word responses. But, I am compelled to tell the 'story' of this quilt from start to finish - every project is full of lessons learned both good and bad. Read the bold text for the executive summary.

A quilt started in a class 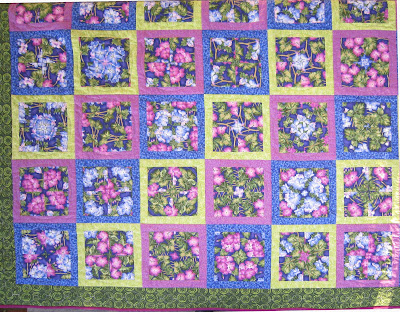 Up until a few months ago I never took a quilting class. There's a reason for this - I believe my own creativity is more important than learning another person's methods. However, my mother and I attended the Remarkables Symposium in Queenstown and I thought doing some classes together would be fun. I was right. But, I felt restricted by the fabric requirements, etc.

The choice of feature fabric was tricky. I had to find something with a 12-inch repeat that had enough contrast so that the blocks were effective. When I got to class I was surprised at some of the choices that others had made - I didn't think that they would work - but, I was wrong. Every fabric produced interesting designs.

The feature fabric and the sashing that I chose created a vivid quilt, but too vivid for my tastes. If I had stuck to blues/purples for the sashing, it would have been more subtle, but they were surprisingly difficult to match. I admit that it is good to push myself out of my comfort zone.

Verdict: A great class but compromised on my choice of fabric to create the pattern.

Wanted to make it bigger 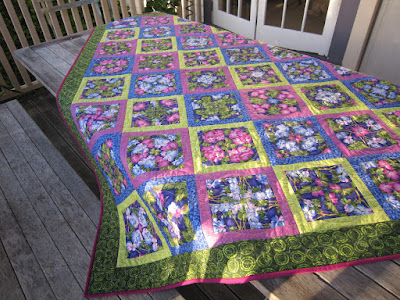 I have a thing about making quilts that are big enough for a bed. The material requirements for the class were for a lap-sized quilt so I had to scramble during the 2 days of class to make enough blocks. I made twice as many as some other people and this put me behind. It wasn't a big problem until I started making mistakes (see below).

Did not have enough sashing fabric

The increased number of blocks and not one but two (or three) mistakes cutting the sashing meant that I needed to add a third sashing fabric in addition to the lime green and blue that I originally planned. Off to the symposium marketplace to find something else - the bright fuchsia pink. Which I cut wrong again! If I was at home I would have walked away from this project and come back in a few days (or weeks...or months).

Verdict: Measure twice cut once, not the other way around. 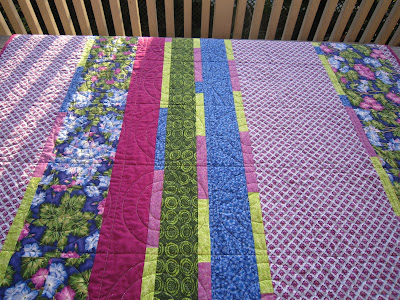 After paying 'top dollar' for the fabric on the front of the quilt and having very little left I went off to my mainstream fabric store to find some bargains for a border and the backing. In NZ we have lovely quilt shops with expensive fabric and mainstream ones with a modest selection of less-expensive ones. I try to support my LQS, but sometimes the prices are painful.

I found some good buys that matched, but not quite enough. So, it was time to make the best of what I had and do a pieced back. I know a lot of people do a pieced back as a design statement, but I only do it out of necessity. I really had to piece this back and I used every little scrap I could find including all of the sashing strips that I cut wrong (yes, there were a lot of them).

I think I took as much time piecing the back as I did on the front. I think it came out well, but was a lot of trouble. Still, quilting has come from a 'make do' philosophy and I do try to adhere to this when I can.

Verdict: A pieced back can be fun but not when you have to.

My pieced back was just big enough. So, I was extra careful when sandwiching the layers to keep them square. Even so, one edge was mismatched. I only discovered this after basting them together. This has happened to me on all but one of the quilts I've finished (5 so far). A mistake I keep making; however, I'm quick to carry on and patch a strip on the back - works a treat.

Verdict: Make the back big enough to accommodate for a bit of skew when basting. 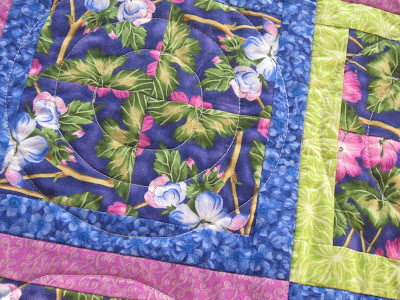 I always struggle with choosing a pattern for machine quilting. I have to balance what works with the quilt design and the limitations of my skill and FMQ on a domestic machine set up in a corner of my bedroom. I'm also mindful of how much work it will take to complete. My tendency is to choose something that follows the piecing; I've never done an all over pattern (I must try that sometime).

This time I took my cue from the circle motif on the border and created a bulls eye on each block. I think this could have been very effective, but I skimped. I should have done more circles but they were troublesome both marking and sewing. A spiral would have been easier than the concentric circles that I did.

If I was willing, I'd do some filler between some of the circles. To be honest, the quilting had already dragged on, so I decided to quit when I had the chance.

Verdict: A less structured but denser design would have been easier and more effective. 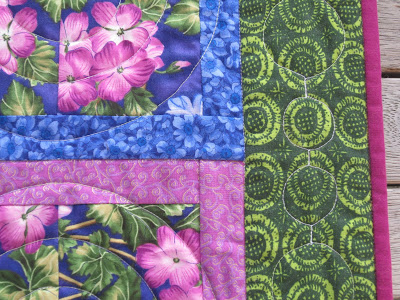 I may sound negative about this quilt, but I'm not. I've learned a lot as I always do when I finish a project - there's nothing to learn on the things that I do well. It's hard to know exactly how things will turn out, especially with those mishaps that happen along the way. If I make a quilt that is perfect and I have nothing left to learn, I will quit.
Posted by Laurina at 12:12 PM